A rep for Lily Allen announced the singer has suffered a miscarriage. 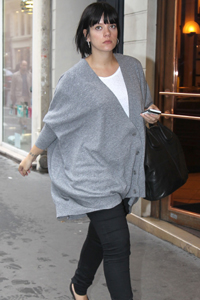 “It is with great sadness that we have to confirm that Lily Allen and Sam Cooper have lost their baby,” Allen’s rep revealed to UsMagazine.com. “The couple ask that their privacy be respected and that they be left alone at this deeply distressing time. No further comment will be made.”

Lily Allen was already six months pregnant when the devastating loss occurred. This is no doubt a sad time for Allen and her boyfriend Sam Cooper.

“Obviously this is a difficult time for them both,” a source told UsMagazine.com. The source added, “Both Lily and Sam are devastated.”

Making the loss even more troublesome for Lily Allen, is the fact that this isn’t her first miscarriage. The singer lost another child three years ago with musician Ed Simons.

Her desire to be a mom

Lily Allen has often expressed her desire to become a mom.

Allen said at one point having kids is “ultimately my main goal” in life.

Our thoughts go out to Lily Allen and Sam Cooper at this time.