In Megamind, Will Ferrell and Tina Fey are larger than life in 3D. As we meet the two stars of the DreamWorks animated joy of a film, Fey in real life is quite the towering presence. In six-inch Jimmy Choo heels, she makes her entrance and appears almost as tall as Ferrell.

Tina Fey plays Roxanne Ritchi and Will Ferrell is Megamind in the film that takes the animated superhero genre and turns it on its head. 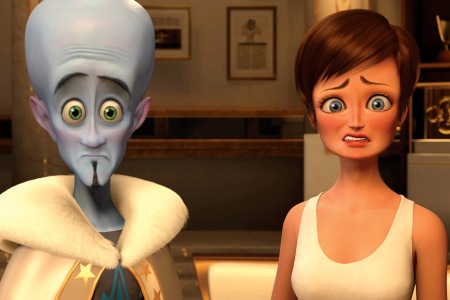 Megamind is the story of a pair of supernatural babies rocketed to earth after their home planet is on the verge of destruction. One is voiced by Brad Pitt in a terrific tongue-in-cheek take on the been-there-done-that superhero mold. When Ferrell’s Megamind appears to get the best of Metro City’s rock-star protector, a vacuum is created and the blue, large-headed Megamind seeks to answer the call.

Fey relished the opportunity to have comedic, vicious voice-over volleys with Will Ferrell. Don’t miss our Megamind movie review November 5, and in the meantime, relish the perfect cinematic comic chemistry of Fey and Ferrell as they discuss with us the inner workings of making Megamind.

Will and Tina talk

SheKnows: Tina, playing a reporter in Megamind, toss in the experience hosting Weekend Update on Saturday Night Live — what’s your secret to success in comedic news? 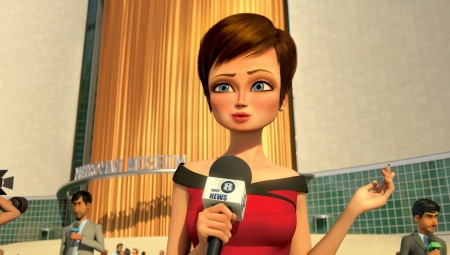 Tina Fey: I am one of America’s foremost fake reporters [laughs]. I’m gonna have a fake show on CNN. No, it was fun to step into this archetypal Lois Lane type of character and I really like that, in this story, she is a modern version of that. She’s active and intelligent and she looks like the young Sharon Osbourne.

SheKnows: Looking at the poster for Megamind, Will, does it give you extra moxie that your character is at the forefront of the poster, as well as serving as the moniker for the movie?

Will Ferrell: [Looks over his shoulder at the film’s poster] It’s very exciting. Well, I don’t consider myself front and center of this fine cast. But…oh, I guess I’m front and center. I haven’t done a lot of this stuff before. It was exciting to get to work on a Jeffrey Katzenberg movie. I love the premise which I felt was so original and to be in a film with this cast is kind of the most exciting part for me. 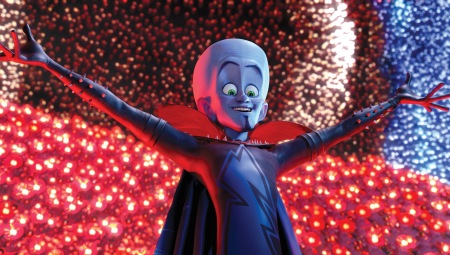 SheKnows: How would Tina Fey choose between Megamind and Pitt’s Metro Man?

Tina Fey: I think I would go for Megamind because he’s very smart and I really do find the purple undertones of his blue skin very attractive. I really do. He’s got beautiful, beautiful skin and he’s smaller than me and I like that. I could physically dominate him.

SheKnows: Will, the accent of Megamind appears to be highly honed in the American-British spy milieu…

Will Ferrell: It’s so disappointing, and it’s not your fault, but I was actually doing a Lithuanian accent so it just shows how bad a mimic I am. But no, it’s just the accent of someone who thinks they’re important. When working with [Director] Tom [McGrath], we just landed on that and felt like it would be appropriate to this guy who is really, when you get down to it, completely insecure; someone who speaks like that but is insecure, a great combination.

Up next…Tina Fey and Will Ferrell find Megamind a little different than their past animated efforts!