Randy Travis has divorced Libby Hatcher, his wife of 19 years. 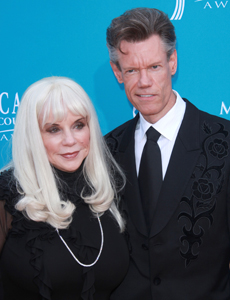 Randy Travis and Libby Hatcher have divorced after a 19-year marriage, but their 35-plus year business relationship remains.

“The divorce was finalized as of this morning,” spokesperson Maureen O’Connor confirmed to People on Friday. “Elizabeth and Randy Travis have agreed to part ways. Elizabeth will remain Mr. Travis’ personal manager. They do not intend to comment any further and ask for your respect for their privacy during this time.”

The National Enquirer broke the news back in July with the rumor that Libby caught Randy cheating with the wife of his dentist, 51-year-old mother of two Mary Beougher.

Libby, who at 69 (some say 67) is much older than 51-year-old Randy, has acted as his manager for his entire career. All seemed to be going well until Libby allegedly planted a hidden camera on Randy’s tour bus after becoming suspicious of his relationship with the dentist’s wife.

“Lib planted a secret camera on Randy’s tour bus and caught him and Mary red-handed,” a source told The Enquirer. “It’s awful. Lib’s the one who made Randy famous. Now he’s throwing her away.”