Brandi Glanville, ex-wife of Eddie Cibrian, was arrested in Los Angeles on Thursday morning for suspicion of DUI. I wonder what LeAnn Rimes will have to say about this? 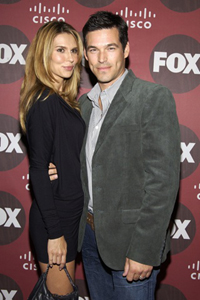 Fresh off her divorce being official from Eddie Cibrian, Brandi Glanville was pulled over last night at 12:05 am in Beverly Hills for an unknown traffic violation. Officers smelled alcohol on her breath and she failed a field sobriety test and was then arrested for suspicion of DUI.

Glanville was still in custody Friday morning and was being held for $5,000 bail. TMZ reports she was released at 8:21 am.

Check out the police report here!

It has been quite the year for Brandi Glanville, who divorced Eddie Cibrian after learning of his affair with his Lifetime movie co-star, LeAnn Rimes. Cibrian and Rimes continue to have a public relationship, and Rimes frequently tweets about Glanville and Cibrian’s two sons, 7-year-old Mason and 3-year-old Jake — much to the annoyance of Glanville.

In fact, after learning that Rimes and Cibrian had to take her son Mason to the ER via Twitter, Glanville called Rimes a “bad parent.” With the news of Glanville’s DUI, I wonder what Rimes will be saying now?

What a day for Cibrian! His girlfriend, LeAnn Rimes is in the middle of the Shape magazine controversy, while his ex-wife got arrested for DUI.