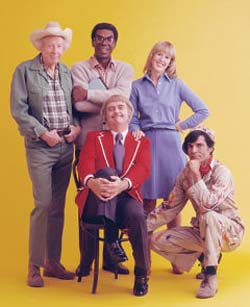 Another beloved television character has passed away.

The vaudeville actor died in his sleep after suffering a short illness, according to CBS News. Wall spent much of the past 50 years as a stage manager for some of the network’s most popular shows, including 60 Minutes, Face the Nation and Captain Kangaroo.

It was that job that got Wall the role of Mr. Baxter, the loveable neighbor of Captain Kangaroo. He got the role after he lobbied the show’s executives for a spot. He was the first African American on the popular children’s television show during the show’s 1968-78 run. He also regularly appeared on the show’s feature, The Missing Paint Mystery.

Wall continued to work for the network up until his retirement in 1988. CBS sportscasters Dick Enberg and John McEnroe honored Wall in 2008 for his 41 years of work on the U.S. Open.

He is survived by Dolly, his wife of 58 years.