Portia de Rossi says her eating disorder almost killed her — until she met Ellen DeGeneres and realized she was worthy of life and love. 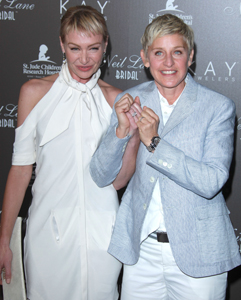 In her new memoir Unbearable Lightness, Portia de Rossi reveals that at the height of her eating disorder — a near-fatal combination of both anorexia and bulimia — she was eating as little as 150 calories a day, ingested 20 laxatives at a time and worked out like a fiend. The end result? A skeletal 82 pounds on her 5’8″ frame.

“I’d never known a day when my weight wasn’t the determining factor for my self esteem,” she wrote. “The more effort I put into starving myself, the more satisfaction I would feel.”

After she collapsed on the set of the film Who Is Cletis Tout? in 2001, she was diagnosed with osteoporosis, cirrhosis of the liver, multiple organ failure and lupus — which caused her eating disorder to swing in the opposite direction, becoming a compulsive eater and ballooning to 168 pounds.

It wasn’t until she met Ellen DeGeneres in 2001 that she began to feel worthy of truly good health. “Ellen has taught me not to care about other people’s opinions,” she said. “Ellen saw a glimpse of my inner being from underneath the flesh and bone, reached in and pulled me out.”

Portia and Ellen wed in 2008. While Portia is certainly still slender, she has much more meat on her bones than she used to and is enjoying living life at a healthy weight.

But Portia’s statements beg the question: Is it truly possible for someone to save you from yourself? Many people who suffer from the ravages of eating disorders are surrounded by people who love and support them, like Ellen does Portia, yet they are still fighting to recover. Do you think Portia is oversimplifying her struggle?