Hawaii Five-O actor James MacArthur passed away Thursday at 72. Read on to learn more about the actor behind the infamous catchphrase “Book ’em, Danno.” 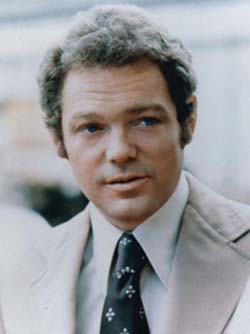 Actor James MacArthur, best known for his role as Danno on the original Hawaii Five-O died Thursday. He was 72.

MacArthur spent 11 seasons as Detective Dan Williams on the show during the 1970’s and is best known for his now-infamous catchphrase “Book ’em, Danno.”

His family was at his side when he died, though no cause of death has been released.

MacArthur was born to well-known Hollywood screenwriter Charles MacArthur and beloved theater actress Helen Hayes. He’s best known for his work on Hawaii Five-O, but MacArthur also acted in various other productions, including The Battle of the Bulge and Disney’s Swiss Family Robinson.

MacArthur’s work on Hawaii Five-O left a lasting legacy — especially true now that CBS is airing a remake of the show with actor Scott Caan as Detective Dan Williams.

“James’ talents and memorable role helped bring this series to life and his support of our remake meant the world to us,” said Peter Lenkov, Executive Producer of the Hawaii Five-O remake. “‘Book ’em, Danno’ will forever be testimony to an actor and character that will not be forgotten. The thoughts and prayers of everyone here at Hawaii Five-O go out to his family, his friends, and his many, many fans around the world.”