Former SNL star Rachel Dratch revealed the identity of her baby’s father on Thursday. Surprise! It’s not a Hollywood guy. 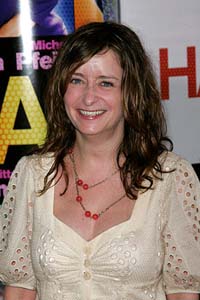 Dratch, 44, met the natural-foods business consultant at a bar and the pair started dating soon after. She unexpectedly got pregnant six months later.

Dratch gave birth to a boy, Eli, in August. At the time, many media outlets hypothesized that the father wanted to remain anonymous or was just a sperm donor.

Not so, says Dratch. She simply wanted to keep it a secret.

“People are expecting the craziest story,” she told People. “I just meant it’s crazy for me!”

Dratch was more than a little surprised when she found out she was pregnant.

“I had bought into all this stuff about, ‘Once you’re over 40…'” Dratch told the magazine. “I’d gone through the whole process of letting go of [the idea of having kids].”

Now, the L.A.-based Wahl moved to New York City to help raise Eli. They aren’t getting married, yet — they’re just taking it one day at a time.

“The focus now is just surrounding Eli with love,” Wahl said of their relationship. “But you never know!”