HBO has announced that the fifth season of the hit drama Big Love will be the last.

Big Love is coming to an end. HBO has announced that the fifth season will be the last for the critically-acclaimed drama detailing the trials and tribulations of a fictional polygamist family. 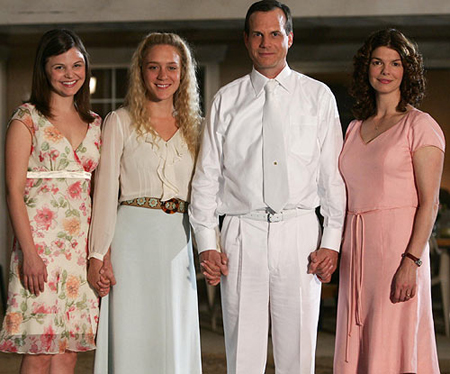 An HBO press release lays out the network’s reasoning for canceling Big Love. “It has been an honor and pleasure to work with series creators Mark V. Olsen and Will Scheffer on this unique and provocative series, and I’m happy that they will be able to bring the story to its close the way they always envisioned. We look forward with great anticipation to collaborating with Mark and Will on their next venture,” said HBO’s Michael Lombardo.

Creators Olsen and Scheffer explained that the cultural landscape has changed since Big Love premiered eight years ago. “When we created Big Love in 2002, we had a strong conception of the journey the Henrickson family would make over the course of the series, of the story we had to tell,” said Mark V. Olsen and Will Scheffer. “While we were in the writers’ room this year shaping our fifth season, we discovered that we were approaching the culmination of that story. Big Love has been our all-consuming labor of love for the past eight years. We are very grateful for HBO’s continuing support and for the collaborative effort of our partners at Playtone, our producers, our fine cast and our fellow craftsmen and crew for making this show the exceptional and joyful experience that it’s been. This coming January, we look forward to presenting our audience with the most vibrant and satisfying final season of a television series that we can produce.”

Even superstar Tom Hanks admitted he will miss the Love with his co-producer Gary Goetzman. “Big Love has been a truly rewarding experience in every way for Tom Hanks and me,” said Hanks’ executive producer partner Gary Goetzman. “We’ve been so fortunate to have had such a tremendous cast over the five seasons, and we’ve never been less than amazed with their brilliance and willingness to take risks. We’ve thoroughly enjoyed our partnership with Will and Mark and have always been blown away by their storytelling abilities. We believe this final season of Big Love will be the best ever.”

Big Love returns to the small screen to finish out its run on January 16, 2011.