The Anna Nicole Smith verdicts are in! Dr. Sandeep Kapoor was acquitted on all charges today for illegally providing prescription drugs to Anna Nicole Smith, but Dr. Khristine Eroshevich and Howard K. Stern were found guilty on most of their charges. 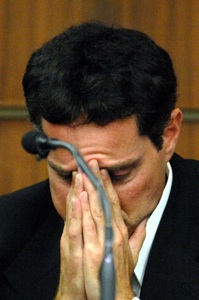 Howard K. Stern, Dr. Sandeep Kapoor and Dr. Khristine Eroshevich were accused of conspiring to feed the Playboy model’s drug addiction and of using fake names to get those drugs.

Stern was found guilty on two counts of conspiracy and Eroshevich on four. None of the defendants were charged with Anna Nicole Smith’s death in 2007.

The defense called only a single witness to the stand, an expert who testified that Anna Nicole Smith suffered from chronic pain, anxiety and depression — not drug addiction.

Deputy District Attorney Renee Rose said the defendants “knew what they were doing was wrong” and that “their conduct was unlawful.” The defense said the charges were arbitrary.

Stern faced nine felony charges, including conspiracy, deceit or misrepresentation, obtaining a prescription for opiates by fraud, unlawfully prescribing a controlled substance, prescribing, administering or dispensing a controlled substance to an addict and obtaining a prescription for opiates by giving a false name or address.

Sentences for Stern and Eroshevich have not been announced.