After Mariah Carey officially confirmed her pregnancy today, her husband Nick Cannon quickly shot down rumors that they were expecting a baby boy. 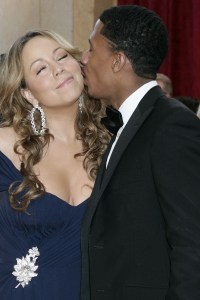 “There’s no truth to that. We don’t know the sex of our child,” Cannon, 30, said on his radio show Thursday morning of Mariah Carey’s pregnancy.

“But it’s strange how that stuff comes out at almost the same time. It’s weird how the media can get involved with your personal life because even when you want to share something, it’s hard to share the truth — because people already spoiled it. It kinda makes the truth cloudy.”

One thing the little Carey-Cannon baby can look forward to is amazing Christmases.

Carey is readying another Christmas album and after the huge hit that was her last holiday record, it looks like Mariah Carey knows quite a bit about yuletide joy.

This year, with her baby on the way, the joy will expand exponentially!

“I mean, she has the most amazing Christmas album that she’s releasing this Tuesday. I’m pretty sure we’re going to take it to the next level this year!” Nick Cannon told Us Weekly.

“She’s the queen of Christmas, but I think it’s going to be even bigger this year. We love the holidays!”