PETA has offered to pay part of Lindsay Lohan’s rehab bill, on one condition: Lohan must go vegan for the rest of her stay. 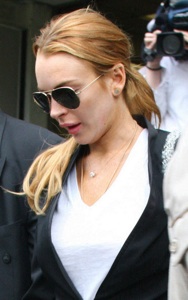 PETA (People for the Ethical Treatment of Animals) has offered $10,000 towards Lindsay Lohan’s rehab stay if she eats a completely vegan diet for the remainder of her stay.

Ingrid Newkirk, president of PETA, told the LA Times, “Lindsay Lohan is the most visible example of a real addict, and if she can conquer her addiction to meat and cheese, absolutely anyone can. If she does, she’ll not only save animals but save her own health, and she’ll be an example to the millions of people who watch her every step.”

Lindsay Lohan will be at the Betty Ford Center until at least January 3 — a sentence imposed upon her by the courts for her probation violation stemming from failing two drug tests.

While there’s no doubt Lindsay needs help, she has been through rehab multiple times already, and The Betty ain’t cheap: A 90-day residential program costs almost $50,000. That’s a lot of dough for a girl whose high-paying gigs dried up long ago.

Of course, if she put the money she was spending on drugs towards those fees, the bill could be paid off in no time.