Golden Globe nominated actress Lisa Blount was found dead in her Arkansas home this morning of natural causes. Blount was 53. 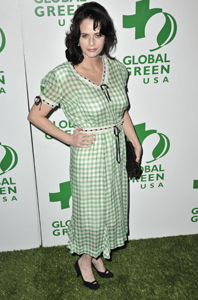 Actress Lisa Blount was found dead in her own bed at the Arkansas home she shared with husband Ray McKinnon, an actor and director who played Coach Burt Cotton in The Blind Side.

Police were called to Blount’s Little Rock home when her mother found her unresponsive. “We think she died very sudden,” Louise Blount said. “She had her phone in her hand and her bed was not disturbed.”

Louise also revealed that Lisa suffered from Idiopathic Thrombocytopenic Purpura, a disease in which low levels of platelets prevent blood from clotting. “I think that might have been part of the problem when she passed away because when I found her she had a purple look on her neck that looked like blood on the surface,” Louise said.

Lisa Blount had been complaining of neck and back pain and had told a friend on Monday she was feeling ill. McKinnon was not home when Blount died.

The actress was best known for her role as Debra Winger’s best friend in An Officer and a Gentleman, earning her a Golden Globe nomination. In 2001, she won a Best Live Action Short Oscar for producing The Accountant, in which she and her husband also starred.

While an official cause of death has not been released, a police report has labeled it “natural.”