Jon Stewart has taken The Daily Show on the road to Washington D.C. to cover the midterm elections and last night, October 27, he welcomed a very special guest — President Barack Obama! There were a few good chuckles, but mostly the Obama interview by Jon Stewart was all business. 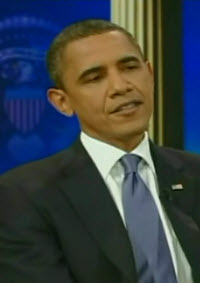 One might argue Barack Obama was preaching to the choir by going on the liberal-minded Daily Show and Jon Stewart was clearly thrilled to have the president in the house, but that didn’t mean Stewart was going to take it easy on Obama.

“You ran on very high rhetoric, ‘Hope and Change,'” Stewart started. “Democrats are now running on ‘Please baby one more chance.’ Are you disappointed in how it’s gone? Are you surprised that other people — even your base — can be disappointed?”

Obama recalled that he’d been warned to expect this reaction by year two, while also admitting it’s to be expected when the nation is hit by 9.6% unemployment, a slow growing economy and flooded homes.

“But, having said that, I look over the last 18 months and I say, ‘We prevented a second Great Depression, we’ve stabilized the economy — an economy that was shrinking is now growing — we have passed historic healthcare reform, historic financial regulatory reform, we have done things that some folks don’t even know about.”

“I think most Democrats out there expect [and] want to see more progress,” Obama conceded. “But… in very difficult circumstances, we have done an awful lot that we talked about during the campaign, and we’re gonna do more in the years to come.” 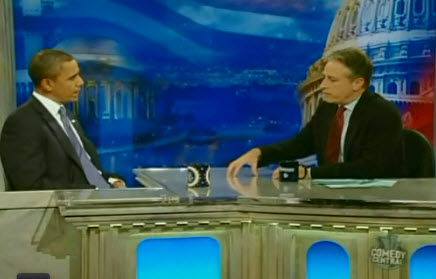 Stewart went on to challenge that while Obama ran on “audacity,” he ultimately delivered a “timid” health care reform. It was clearly a notion the president is tired of hearing.

“You’ve got 30 million people who are gonna get health insurance,” Obama retorted. “You’ve got a Patient’s Bill of Rights that makes sure that insurance companies can’t drop you when you get sick, makes sure there aren’t lifetime limits, makes sure kids who don’t have health insurance can stay on their parents’ insurance until they’re 26, and cuts the deficit by over a trillion dollars. This is what I think most people would say is as significant a piece of legislation as we’ve seen in this country’s history… those areas where we had control over process, we actually made changes.”

Stewart reminded the president that his campaign had given an expectation that we’d reform at a very basic level, but it’s seemed like politics as usual. The insurance system, for example, didn’t get a massive overhaul, but more Band-Aids.

“Over the last two years, in an emergency situation our basic attitude was, ‘We’ve gotta get some things done, in some cases quickly,'” Obama demurred. “In order to do that, basically worked with the process as opposed to transformed the process — and there’s no doubt that that frustrated folks. It frustrates me.”

Clearly, the part that most frustrates the president is the filibuster scene that gets in the way of progress on Capitol Hill. He also called out some issues he feels require attention and action, like energy, immigration reform and job creation.

“There are a lot of folks who are worried that if we don’t make serious investments in education, in energy, in infrastructure, in research and development, we’re gonna start fallin’ behind,” Obama said.

With that, The Daily Show was out of time. Obama’s final message was a reminder to Americans to get out and vote on Tuesday.