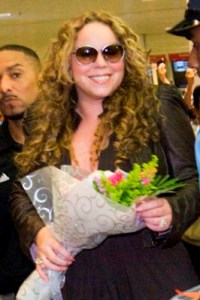 Mariah Carey finally put to rest rumors of her delicate condition. In the full interview with Billy Bush to air on Access Hollywood October 28, Mariah Carey revealed that she and Nick Cannon are expecting their first child.

Billy Bush broke part of the interview during a segment airing on Today, Thursday morning. Mariah Carey told Billy Bush, “Yes, we are pregnant, this is true! It’s been a long journey. It’s been tough because I’ve been trying to hold on to a shred of privacy.”

The diva songstress explained to Billy Bush, “It’s still early, I’m expecting in the spring, I’ll say that. I don’t want to give too much of, like, specific outlines.”

The not-so-shocking revelation also came with another emotional admission. Mariah Carey suffered a heartbreaking miscarriage two years ago. Carey was just one month pregnant at the time. “It kind of shook us both and took us into a place that was really dark and difficult,” Carey told Billy Bush of the miscarriage. “When that happened I wasn’t able to even talk to anybody about it. That was not easy.”

Nick Cannon said his wife’s pregnancy is “absolutely emotional.” He shared that “the greatest gift on earth is a child.”

Before Mariah Carey sat down with Billy Bush, reports were pouring in that Mimi was expecting a boy.

A source recently told Perez Hilton, “She’s having a boy, but the reason that Mariah didn’t want to say anything is because she is 40, and she’s superstitious. But she’s going to appear on Oprah and The View, so she’s planning on making the announcement soon.”

Billy Bush squashed that piece of information on Today when he said the couple would be waiting until the baby’s birth to find out whether it was a boy or a girl.

The source also told Perez Hilton that the expecting parents are up in the air about where to raise their bundle of joy. “They haven’t decided whether they’ll raise the baby in New York or Los Angeles.”

Looks like Billy Bush scooped some media outlets. For more on Mariah Carey and Nick Cannon’s interview with Billy Bush, check out Access Hollywood on October 28.

Official congratulations go out to Mariah Carey and Nick Cannon!