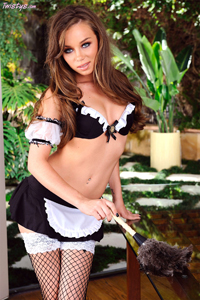 Twenty-two-year-old Capri Anderson, the star of such cinematic masterpieces as Filthy Family, Lesbian Lust, Seduced By a Real Lesbian, Lez-Stravaganza 11, Power Munch 3, Big Bust Cougars, Do Me Wet, and Strap-On Sally, specializes in girl-on-girl and single action scenes. She’s also reportedly quite upset by reports that she’s a hooker.

Sources close to the situation say Charlie Sheen met Anderson for the first time on Monday in the bar at The Plaza Hotel, where he was staying — in a separate room — with ex-wife Denise Richards and their two daughters Lola and Sam.

That same night, Charlie went to dinner with Anderson, along with four other women and three guys. Denise even tagged along, but reportedly left in a hurry, without even finishing her appetizer — because things got real weird, real fast.