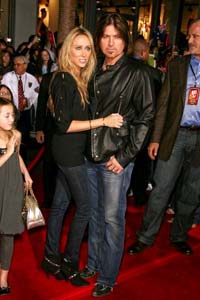 Country singer Billy Ray Cyrus and wife Tish Cyrus have filed divorce papers in a Tennessee court after 17 years of marriage, People reports. It’s rumored that Billy Ray was the one to file, according to TMZ.

The parents of Hannah Montana star Miley Cyrus cite the ever-popular irreconcilable differences at the reason for their split.

The couple released a statement to People asking for privacy.

“As you can imagine, this is a very difficult time for our family,” they said in the statement. “We are trying to work through some personal matters. We appreciate your thoughts and prayers.”

The news comes as a shock to many who saw their long marriage as a loving partnership. The two are parents to a combined family of six children, including their children together: superstar Miley, Braison and Noah. Billy Ray also fills the dad roll of Tish’s children from a previous relationship — musician Trace and Brandi. He also has son, Christopher, from a past girlfriend.

It looks like Billy Ray is turning to work to keep his mind off the trying times at home. He’s currently working with stepson Trace on a reality show, UFO: Unbelievably Freakin’ Obvious. He’s also lending his vocals to an L.A.-based grunge rock band Brother Clyde.

Stay tuned to SheKnows for more info on this developing story.