Sugarland’s The Incredible Machine took the number one spot on the Billboard 200 albums chart last week, while Kings of Leon’s Come Around Sundown took second place. Both bands should enjoy their time at the top, because they have big competition now that Taylor Swift’s new album has dropped! 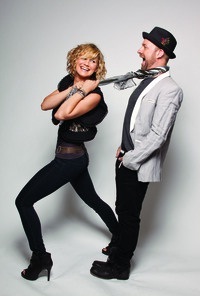 While Kings of Leon gets credit for topping the iTunes album charts, country duo Sugarland took the lead in the Billboard 200 with The Incredible Machine, which sold 203,000 copies last week, according to Nielsen SoundScan.

Kings of Leon broke ground with Come Around Sundown, landing their highest spot in the charts with their best sales week ever. Their 2008 album Only By the Night topped off at fourth place, while 2007’s Because of the Times made it to number 25, 2005’s Aha Shake Heartbreak topped off at number 55 and 2003’s Youth & Young Manhood only made it to number 113.

At this rate, Kings of Leon’s next album could be the one to land them the coveted number one spot on the Billboard 200!

The Billboard 200 number three and number four spots went to a set of old school crooners. Elton John and Leon Russell’s The Union took third with 80,000 and Rod Stewart was right on their tail with his new album, Fly Me To The Moon, which sold 79,000 copies.

Last week’s number one on the charts, Lil Wayne, dropped but managed to stay in the top five. His album I Am Not a Human Being sold 65,000 copies in its sophomore week.

Now that Taylor Swift’s Speak Now has hit the market, however, everyone with an eye on the number one spot for next week should just stand back. Her album dropped Monday, October 25, and this week’s sales predications range from 800,000 to a record-breaking 1 million.

The last person to manage those numbers in just one week was last week’s big winner, Lil Wayne. Back in June 2008, his album Tha Carter III banked 1,006,000 in one week.

Swift’s last endeavor, Fearless, broke into the Billboard 200 at number one with 592,000 sales and went on to sell six million, so far.

Other chart makers to keep an eye on include Miley Cyrus’ Hannah Montana Forever, which came in at number 11, and Bob Dylan’s The Witmark Demos: 1962-1964 (the Bootleg Series Vol. 9), coming in at number 12. Bruno Mars’ Doo-Wops & Hooligans fell all the way to number 24, but still stands a chance at hitting a million sales sometime soon.

In the Digital Songs chart, Far East Movement is making serious waves with their single Like a G6, while Swift’s Mean stands at number two.

Read on for more Sugarland