Gossip Girl costars Blake Lively and Penn Badgley have split up, confirm their reps. Will this make it awkward between their on-air characters, Serena van der Woodsen and Dan Humphrey? 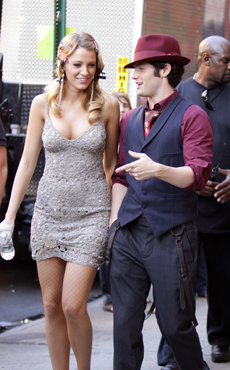 Blake Lively and Penn Badgley have decided to end their three-year relationship, confirms People. The couple, who met on the set of Gossip Girl, was just spotted last weekend buying candles together at Henri Bendel in New York — so what could have gone wrong?

Sources on the set of Gossip Girl said they had no idea there was trouble brewing. “Nobody on set had any idea,” the source tells Us Magazine.

Lively and Badgley reportedly called it off mid-September, but kept the news private until now. “They’re professionals,” the insider revealed. “They’re still good friends and hang out on the set.”

Did Blake’s blossoming career get in the way of their relationship? Her role in The Town has made her a hot Hollywood actress. Badgley is also getting movie roles, appearing in Easy A with Emma Stone, however, his star does not seem to be rising as fast as Lively’s.

Regardless of what happened, these young Hollywood stars are handling their breakup and the spotlight surprisingly well.

“Yeah, I don’t comment on my relationships, so you can skip that one!” Blake Lively told Allure magazine last month, when asked about her relationship. “My anonymity is something I treasure. Wanting to be an actor and wanting to be famous are different.”

read on for More celebrity breakups