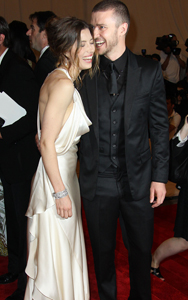 Justin Timberlake and Jessica Biel are on the outs after he had a three-day fling with Olivia Munn in September, a source told Us Weekly.

Munn, 30, is a Daily Show correspondent and stars in the upcoming NBC show Perfect Couples. She and Timberlake, 29, met at a MySpace event (people still use MySpace?) and Justin immediately began his chase.

The source says Munn told Justin she wouldn’t even entertain the idea of dating him if he was still with Jessica, so he used the oldest trick in the book: He lied. The source says Timberlake “has been telling people it’s over with Jessica, even though the reality is he’s just doing it behind her back.”

Munn fell for the weekend fling believing that Justin and Jessica were splitsville. She brought him to the Gansevoort Park Avenue NYC hotel, where she was staying, and the pair was “openly affectionate” as they shacked up together all weekend.

And of course, the source says the two “had amazing sex.”

read on for more justin timberlake