Last night’s Dancing With the Stars was a real shocker, with season favorites Jennifer Grey and Audrina Patridge on the chopping block. Who had to hang their dancing shoes up? 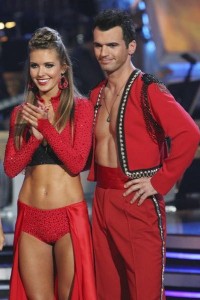 The Dancing With the Stars judges were shocked that The Hills‘ Audrina Patridge and Dirty Dancing‘s Jennifer Grey were under the red elimination light. Voters decided it was time to send Audrina back to the hills. Did they get it right?

Even though Kurt Warner and Anna had the lowest judges’ scores after their awkward paso doble only earned them 22 points, voters kept the likeable NFL champ in the game. After dancing what judges dubbed her best dance, Bristol Palin was announced safe.

One by one the dancers were given the green light, leaving the shocking final two, Grey and Patridge, standing side-by-side. “I’m almost at a loss for words. This is ludicrous! That these two — one of these — is going home is absolutely nonsense!” Goodman said.

After Audrina Patridge was told she was going home, she looked a little shell-shocked as she gave her final goodbye. “I just know that I had so much fun this entire experience and I made such good, new friends and Tony has been such an amazing teacher. I’m definitely going to be coming back to visit… and thank you [to the judges] for all the comments, it did help as motivation. And all the fans, for all the support and everything. It’s been a fun journey,” she said.

Kylie Minogue performed and Heart absolutely killed it performing Baracuda. “Iconic rockers” Bret Michaels, Dee Snider and Alice Cooper weighed in on their favorites. Cooper called Bristol “a breath of fresh air” and named Kurt Warner as one of his favorites.

Even though Jennifer was in jeopardy this week, many still feel she could win it all, including Brandy’s brother Ray J.

“Jennifer Grey is for real. I think Jennifer Grey, she got that Dirty Dancing thing going on, you know what I mean?” he told MTV News. “And whenever you dirty dancing, it’s gonna be some competition, please believe that.”

More Dancing With the Stars: