Denise Richards faced new questions on Wednesday morning’s Today Show after Charlie Sheen’s hotel freak-out. What did she have to say about it?

Denise Richards spoke out on the Today Show after ex-husband Charlie Sheen was hospitalized Tuesday. 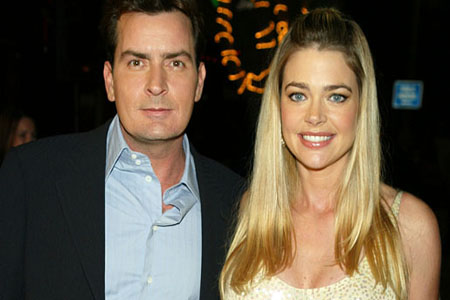 The actress was there to promote her new show, but she ended up taking more questions about her ex than her work.

Because really, who cares about her new show? We’d rather get the juicy details on Sheen.

The normally attention-seeking Richards was uncharacteristically quiet about the events that led up to Sheen’s hospital visit. She was in a nearby room at the Plaza Hotel with the couple’s two children and admitted to hosts Hoda Kotb and Kathy Lee Gifford that she knows what happened.

“My daughters are very unaware of what happened. We’re really trying to protect them. This is Charlie’s, if he wants to discuss it, I’ll let him do it. But at the moment, I don’t want to say anything,” she said.

Sheen came with her to New York while she’s on the publicity tour for Blue Mountain State, her new Spike TV comedy. They spent the weekend together, taking their two daughters to the American Museum of Natural History and the Broadway musical Mary Poppins.

Sheen jetted back to L.A. after he was released from a NYC hospital yesterday afternoon. The actor reportedly volunteered for a psych evaluation. He hasn’t been charged for trashing the Plaza suite and it’s looks like he’ll just be responsible for the damage he caused in the room.

He’ll reportedly be back to work on Friday filming a cameo for an upcoming movie, leading Richards to face the music.

“Charlie will always be a part of my life, we are bonded together forever,” she said. “No matter what the situation is, he’s their dad. It was unfortunate what happened, I can’t control what happened, all I can do is move forward.”