Twenty-five years ago, Marty McFly (Michael J. Fox) took Doc Brown’s (Christopher Lloyd) famed DeLorean Back to the Future for the first time! In honor of the big moment, the Back to the Future: 25th Anniversary Trilogy has landed and offers to take fans back to the 80s with juicy documentaries.

In anticipation of Back to the Future‘s 25th anniversary, the cast and crew of the 1985 time-traveling tale have been reuniting all over the place, starting with the Michael J. Fox-Christopher Lloyd-DeLorean reunion at the Scream Awards and a party in New York City celebrating the movie’s impact on pop culture. 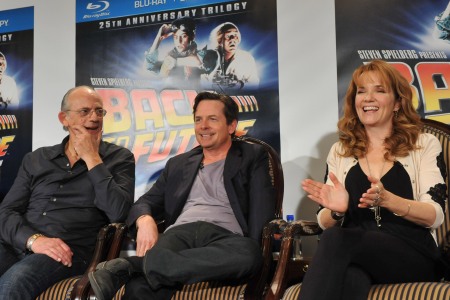 Of course, those anniversary celebrations also serve to promote the Back to the Future: 25th Anniversary Trilogy, which is out on DVD ($49.98) and Blu-ray ($79.98)!

The box set has all three Back to the Future flicks and the regular round of bonus material, including interviews with Michael J. Fox, deleted scenes and outtakes, Huey Lewis and the News music videos, a time-traveler’s physic’s lesson and more.

With all this good stuff, it’s the brand new, six-part documentary on the franchise, Tales from the Future that has everyone talking. The look back offers some juicy behind-the-scenes dish, like why Crispin Glover’s George didn’t return for the sequels (money!), who was originally eyed to play Doc (John Lithgow!) and footage of the original Marty McFly (Eric Stoltz!).

While Michael J. Fox was always the guy writer-director Robert Zemeckis had in mind for Back to the Future, the pint-sized teen heartthrob was busy with a little show called Family Ties. The story is that Zemeckis “settled” for Eric Stoltz, another 80s teen hunk in-the-making. Stoltz shined in Mask (with Cher) and a slew of flicks, but the sulky cutie just didn’t fit the bill of upbeat Marty McFly. “He’s a terrific actor, but his comedy sensibilities were very different than what I envisioned,” Zemeckis explained in Tales from the Future. “He and I were never able to make that work… so I had to make this horrific decision, which was very heartbreaking for everybody.” 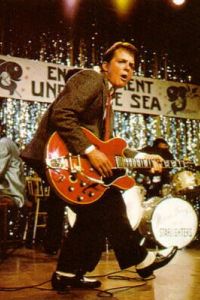 Five weeks into shooting, Stoltz got the boot and Fox took over, pulling double duty on Family Ties. “I did the show in the daytime and the movie at night,” Fox recalled on Today. “There are literally big chunks I can’t remember.”

His onscreen mom, Lea Thompson, has better memories of the daily grind, which included hours in makeup to play “current day” 47-year-old Lorraine. “It’s so funny, because we would be like, ‘Oh, you look so old!’ and now, of course, I’m there,” Thompson said on Today. “It was all a lot of work. For me, the fun was seeing when Bob Z was happy with something we were doing. He would just giggle and it was so hard for him, so it was fun to make one of his visions come true.”

While it may be difficult to imagine anyone saying no to Robert Zemeckis these days, it turns out Back to the Future was his Little Engine that Could. “I had to make another movie before anyone would take this seriously,” Zemeckis recalled on Today. “Fortunately I was able to do Romancing the Stone and then, because of the success of that movie, I thought, ‘Maybe this guy could make it work.’ Steven Spielberg was always a fan, so we brought it back to him and he took it to Universal.”

Back to the Future would go on to become the top grossing film of 1985, banking almost $400 million — which was a lot more money back then! It also spawned two more installments and launched a few good careers.

After all this chatter about the 1985 megahit, SheKnows might have to take a trip Back to the Future ourselves!

Back to the Future at 25: welcome to the party!