Shia LaBeouf and Carey Mulligan call it quits after a yearlong courtship. 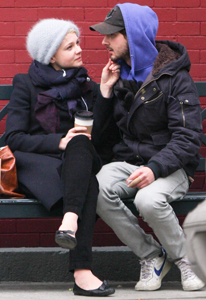 LaBeouf and Mulligan, who were first linked in August 2009 after being spotted smooching in a New York restaurant, split “some time ago,” a source told People.

Now, since Mulligan had no place other than Shia’s to crash in LA — her home base is England — she is shacked up in a budget Best Western hotel while filming her latest flick Drive.

“I was stunned when I saw Carey walking across the lobby,” a hotel employee told MailOnline. “You would expect her to stay at the Four Seasons, not here. She is very easy-going. She hasn’t made any special requests and doesn’t ask to be treated any differently. She keeps herself to herself and seems quite happy here.”

You can’t be too careful in this economy — even when you command $5 million per picture.