Musical phenom Greyson Chance sky-rocketed to fame as an overnight YouTube sensation-turned-Ellen DeGeneres discovery. Now, Chance is ready to take on the music world with the debut of his hot new single, Waiting Outside the Lines on The Ellen DeGeneres Show.

Justin Bieber is claiming it’s his world, but after seeing Greyson Chance’s performance of his debut single on The Ellen DeGeneres Show, Bieber might want to make room for the newcomer. 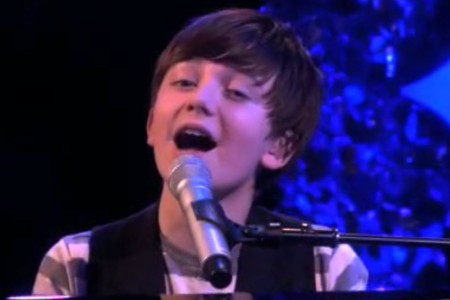 The pop star is being heavily compared to Justin Timberlake and his innocence and youthful take on the world will be a new spin on music, in my opinion.

During an interview with Ellen DeGeneres, Chance took a moment to address bullying being a young star in the media. One of his songs, Purple Sky, deals with the issue head-on.

“It’s saying a normal sky is a blue sky, but it’s saying that a purple sky is different but it’s still beautiful in its own way,” he said. “The whole meaning of the song is when kids are feeling these horrible things and people are calling them names and being so cruel and judgmental. I want kids late at night, when they’re crying and they feel so low, to listen to the song and just go it’s going to get better, it’s okay.”

This kid is already talking like an A-lister. This kid can be compared to anyone, but when it comes down to it, Greyson Chance is his own artist. Check out Greyson Chance’s performance of Waiting Outside the Lines.