Week six of Dancing With the Stars was “Rock and Roll Night” for the contestants. The judges said that Brandy nailed it, while Jennifer Grey was called “way out of control!” 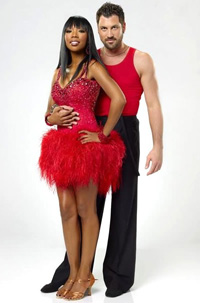 Rock and Roll Night of Dancing With the Stars had each couple perform a paso doble or a tango, as well as a pre-judged “dance marathon” and Brandy and Maks took home the bragging rights on that one.

DWTS: The top of the leaderboard

Brandy and Maks are at the top of the leaderboard, scoring a 36 out of 40 points for their sexy tango. “Is she Brandy or Tina Turner in Mad Max?” asked Bruno.

Audrina Patridge and Tony came in second, scoring 32 points for their paso doble, while Rick Fox and Cheryl Burke scored a 30 for their tango. “Like a Mohican on the warpath!” Bruno said of Cheryl’s silver knee-high boots. Apparently, he has the goal of making movie analogies for every costume he sees on this episode. Kyle Massey and Lacey scored a 30 for their tango that was good, but did have some poor footwork.

dancing with the stars: The bottom three

The “chosen one” (according to Carrie Ann), Jennifer Grey and her partner Derek Hough scored a disappointing 29, landing them in the bottom of the pack. Their paso doble was met with harsh criticism from the judges, including Carrie Ann who said, “You need to calm down. You’re way out of control!”

Bristol Palin attempted to show more personality this week (I guess air guitar counts as personality!), and it was met with success, as the judges said this was her best dance to date and gave her a score of 28.

At the bottom of the leaderboard was NFL champ Kurt Warner and Anna, whose paso doble was called awkward and earned them just 22 points. “You looked awkward doing it, I felt awkward watching it,” said Len. Bruno, back to his movie analogies, said, “It was like Jackie Chan. We want Banderas!”

Tell us: Who do you think will be eliminated?

read on for More Dancing With the Stars