Kara DioGuardi, the former American Idol judge who was handed her walking papers earlier this year to make room for new judges Steven Tyler and Jennifer Lopez, has landed her own show on Bravo, Going Platinum. 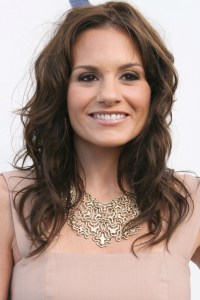 If you ask us, DioGuardi is trading up. Bravo may not have the numbers of Fox’s juggernaut, but the cable network’s following is cultishly loyal and this new venture offers her a vehicle to create her own brand from the start, as opposed to jumping onboard a show already rolling downhill and just trying to hang on for dear life.

Kara DioGuardi will serve as the head judge on the show which searches for the next great singer-songwriter talent.

Hosted by Jewel, the press release for the show, previously titled Hitmakers, explains that it follows 12 musicians who compete in a series of songwriting challenges that range from dance tracks to love ballads, with each episode focusing on a different genre of music. Here’s hoping there’s a power ballad week! In the end, one singer-songwriter will win $100,000, a publishing and recording deal, but first the contestants “must write and perform their songs…as they compete and live together.”

Musical preferences are very particular and by forcing people to co-exist and create in the same space, all we can think about is our diabolical neighbor who blasts Lady Gaga at 3 am and inspires visions of Saw-like torture in our minds. Going Platinum could be the most back-biting, hair-pulling, knock-down-drag-out show Bravo’s seen since The Real Housewives of Atlanta.

What’s most exciting to us is, this is Bravo, not Coca-Cola sponsored Fox. There’s no need for everyone to be perky and smiling, coming together for high energy medleys that’ll inspire fans to buy tickets for the follow-up concert series. Bravo uses table flipping to market The Real Housewives of New Jersey, they love in-fighting and drama, and we love to watch!

This time around, Kara DioGuardi can be as bitchy as she wants, showing singers how to sing a run properly without it turning into a spectacle that ends with her in a bikini as a mock apology.

Going Platinum is expected to premiere in 2011 and run for ten episodes.