Mariah Carey is pregnant and expecting a boy in March, say sources close to the singer. This will be the first baby for Mariah Carey and her husband, Nick Cannon. 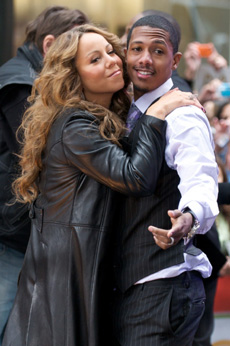 “She stopped drinking back in March or April this year,” says the source.

Why no pregnancy announcement?

Mariah is waiting to announce her pregnancy because she is superstitious about her age (she is 41), however, she plans on sharing the news while promoting her album, Merry Christmas II You!

“She’s having a boy, but the reason that Mariah didn’t want to say anything is because she is 40, and she’s superstitious,” a source tells Perez Hilton. “But she’s going to appear on Oprah and The View, so she’s planning on making the announcement soon.”

“They haven’t decided whether they’ll raise the baby in New York or Los Angeles,” says the source.

Mariah and Nick are living in LA while awaiting renovations on their new $7 million Bel Air mansion, which, by the way, used to be the home of Farrah Fawcett. The 11,750-square-foot home will have plenty of room for lots of babies.

read on for More Mariah Carey