Blossom’s Jenna von Oy wed computer consultant Brad Bratcher in an intimate hometown ceremony. Get all the inside details on Six’s wedding day! 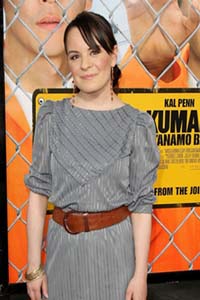 The name doesn’t ring a bell? You’ll probably remember her best for her work as the excitable, fast-talking best friend Six LeMuere on the popular 90’s sitcom Blossom.

Never listen to your Mama!

The actress wed Dell computer data consultant Brad Bratcher on Oct. 10 in her hometown of Newtown, Conn. The couple began dating two years ago after meeting at a Nashville bar, according to People.

The couple got engaged last New Year’s Eve and quickly threw together an elegant, but simple, wedding that fit the couple’s personality.

The couple’s 83 guests watched the nuptials in a garden outside a bed and breakfast. Their dog, Bruiser, did his duty as ring bearer.

Guests snacked on the couple’s peanut butter and chocolate cake, sipped Malibu Rocky Oaks wine and danced the night away, according to People.

Their first dance? Fittingly, Marry Me by Train. The bride also wrote a song for her new husband.

“We knew it would be a wonderful day,” she told People. “But it was a blast — more fun than we ever expected!”

55 mins ago
by Maggie Clancy