South Park creators Trey Parker and Matt Stone have issued an apology to two writers, Dan Gurewitch and David Young, after realizing that an episode of their long-running Comedy Central series held glaring similarities to a video the two writers put on CollegeHumor.com back in August. 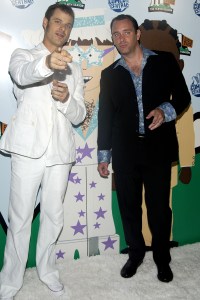 Both the South Park episode and the web video satirize Inception, Christopher Nolan’s summer blockbuster that was a commercial and critical smash and is expected to be nominated and take home several Oscars.

Here are some of the overlaps:

College Humor: “We need to move to the next dream level before these projections kill us.”

South Park: “We need to move them all to the next dream level before the projections kill them.”

College Humor on what “Limbo” is: “Shared unconstructed dream space.”

South Park on what “Limbo” is: “Empty scary dream space.”

College Humor on trying to escape “Limbo”: “That doesn’t sound so hard.”

“We don’t have time for this.”

“Then we go into Fischer’s dreams.”

“But Fischer will think we’re in Browning’s dream.”

“We don’t have time for this.”

“O.K., fine, so you’re going to take my son to a dream within the dream, and then what?”

“Then we go into your husband’s dreams.”

“But your husband will think we’re in Hasselbeck’s dream.”

In both: “Sometimes my thoughts of my dead wife manifest themselves as trains.”

During a phone conversation with the Times, Stone said, “We do the show in six days, and we’re stupid and we just threw it together. But in the end, there are some lines that we had to call and apologize for.”

So did Matt Stone and Trey Parker knowingly rip off some unknown College Humor director’s sketch? Or did an evil corporation infiltrate their dreams, plant the idea and let it blossom?

Or is it just that Inception is really easy to make fun of if you take certain pot shots?

Actually, Stone and Parker admitted that when they were producing their episode, neither of them had seen the movie, so they took to the Internet and watched a bunch of parodies. Apparently, the subconscious is just as powerful as Nolan suggests because they ended up, consciously or unconsciously, lifting a ton of “inspiration” from the College Humor sketch — not that the writers are complaining.

Gurewitch posted on his blog that he accepted Stone and Parker’s apology.