Matt Damon and wife, Luciana, are the proud parents of another baby girl. 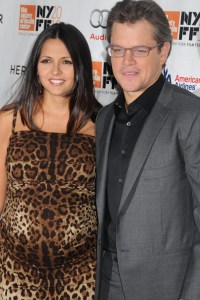 Matt Damon and Luciana welcomed Stella Zavala Damon into the world on October 20.

Matt and Luciana, who have been married since 2005, made the announcement they were adding to their girl-heavy family back in April.

“It’s pretty easy to kind of lose your way. I think working consistently with great people is really helpful. Also having kids is really helpful. They kind of disabuse you of the notion of your greatness pretty quickly,” Matt Damon told Parade back in April of having a family.

“There’s a routine that you get into with kids that precludes you from going back to your single days. I’m probably more boring than I used to be. I go to bed earlier and I get up earlier.”