Katy Perry and Russell Brand have gotten married in India! Find out all about the Perry and Brand ultra-extravagant wedding! 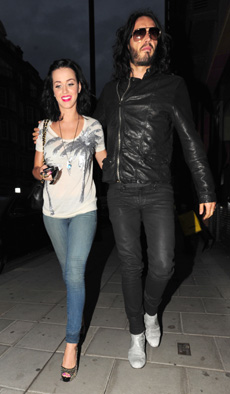 The couple released the following statement:

“Russell Brand and Katy Perry are overjoyed to confirm that they were pronounced Mr. and Mrs. Brand on Saturday, October 23. The very private and spiritual ceremony, attended by the couples’ closest family and friends was performed by a Christian minister and longtime friend of the Hudson Family. The backdrop was the inspirational and majestic countryside of Northern India.”

The couple treated guests on Friday night to a Bollywood-themed party. The couple and guests all wore traditional Indian attire. Perry reportedly wore a plain red sari while Brand wore an Indian outfit called a “kurta pyjama” and they had a traditional mehndi ceremony, which is a pre-wedding ritual for Indian marriages.

Guests got quite the show, with acrobats and jugglers as well as Indian kettle drums.

On Saturday, the couple had a traditional Indian wedding ceremony, called a “bharat” and were transported by elephants named Laxmi and Mala to the Aman-i-Khas resort (pictured, below) where they exchanged vows in front of 80 people. The couple reportedly got engaged at this exact spot last December.

The couple incorporated other traditional Indian rituals into their ceremony, including walking around a sacred fire seven times while saying Sanskrit mantras and tying a wedding scarf together. You may have also seen pictures of Perry wearing a gold nath, which is a traditional bridal ring that goes from her nose to her hair. In Indian tradition, Brand would have removed this on their wedding night.

Perry is rumored to have worn a dress that featured both a traditional Indian sari and traditional white wedding gown, with rumored designers including Elie Saab, Zuhair Murad and Donna Mizani. 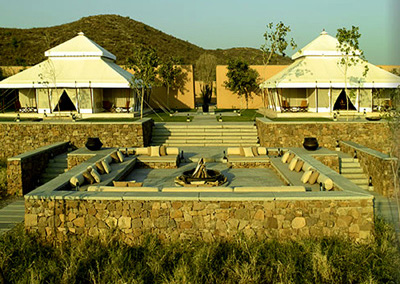 Security was extremely tight around the resort, but Brand reported he was trying to keep their ceremony special and private — so does this mean no wedding pictures will be released?

“We just love each other and we want to get married in front of our friends and family and keep it very normal. It ain’t about selling the pictures, it ain’t about doing no pre-nup, it’s just a normal thing,” he told the New York Times.

read on for More Katy Perry and Russell Brand