Seventeen-year-old Taylor Momsen flashed an audience during a concert this week in New York City. Where are her parents in all of this?

Taylor Momsen turned her bad-girl behavior up to 11 earlier this week when she flashed fans at a concert in NYC. 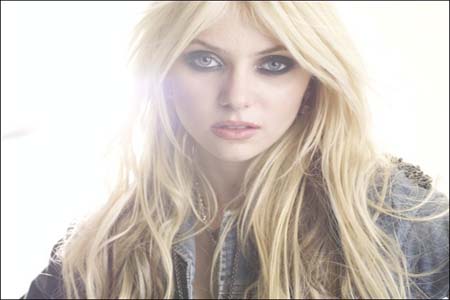 Momsen and her band The Pretty Reckless were performing at the Paper Magazine party at Don Hill when the 17-year-old Gossip Girl star ripped open her top during Make Me Wanna Die, revealing her bare chest.

Well, she wasn’t bare-chested — she had black pasties covering her nipples.

Rebel without a cause

This is a girl who clearly wants attention — she’s crying out for it. Sure, many teenage girls explore their sexualities around her age, but few girls are so blatant about it. It’s sad, really.

Are her parents to blame? Maybe they were stage parents and the only way she gets attention is by acting out. Or, maybe they don’t care, as long as she’s bringing in the cash.

Is Hollywood to blame? Maybe she’s feeling the pressure to stand out among the crowd. However, she’s a naturally tall, beautiful girl who would stand out without the skimpy outfits and raccoon eyes. Now she’s on the verge of becoming a joke that no one in Hollywood will want to deal with.

Yes, Taylor Momsen, we get it — you’re so edgy.

But, you’re 17. Sadly, no matter what you think, you’re not old enough to be flashing your breasts on stage. Slow down — be a teen. It’s fun, and you’ll miss those years when they’re gone.

Or, better yet — why don’t your parents step up, be parents and give you some proper pants to wear? Just a thought.