Conan O’Brien’s new show (aptly titled Conan) will begin on November 8th on TBS. Find out his lineup for his premiere week! 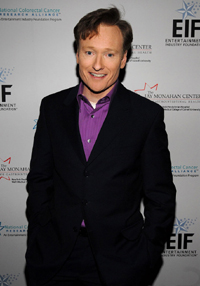 After being booted by Jay Leno from his Tonight Show slot, Conan O’Brien’s new TBS talk show, Conan, looks to be a great one! His lineup features some of his longtime friends, as well as some cool rare performances.

Here is what is in store for the first week of Conan:

Tom Hanks is the person that gave Conan his nickname of “Coco,” so it is only fitting he is one of Conan’s premiere guests.
Jack White and Conan are longtime friends and the White Stripes rocker even released Conan’s music on his Third Man Records.

Max Weinberg will no longer front Conan’s house band, with the Basic Cable Band replacing him. Led by guitarist Jimmy Vivino, who worked with Conan on Late Night and The Tonight Show with Conan O’Brien, the Basic Cable Band will be a good replacement for Weinberg.
The band will also include Scott Healy on keyboards, Mike Merrit on bass, Mark Pender on trumpet, Richie Rosenberg on trombone and James Wormworth on drums.

Watch the premiere of Conan on November 8 at 11 pm (ET) on TBS with Seth Rogen and a musical performance by Jack White.