Project Runway episode 13 had the contestants’ nerves at an all-time high as they fought for their spot, however, one talented designer had to be sent home. Did they get it right? 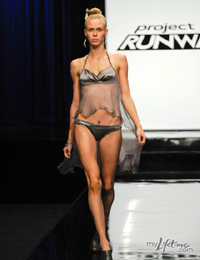 The four remaining designers of season eight Project Runway, Andy, Michael, Mondo and Gretchen, were told they had six weeks and $9,000 to create a ten-piece collection. Tim Gunn would be stopping by the contestants’ homes to find out their progress.

Tim visited Michael in Palm Springs, California, where we meet his partner, Richard. Tim was not impressed with the fact that he made 18 looks and rejected six of the looks that were a strange shade of pink.

Andy, meanwhile, is in Hawaii finding inspiration from the Buddha Garden in Laos and translating that into a green and grey look onto his clothes.

Tim went to Denver, Colorado, to meet with Mondo and check out his Mexican-inspired pieces. Tim loves almost all his pieces, except one pink 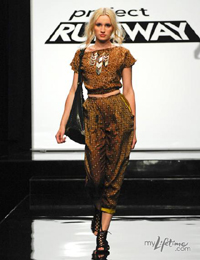 outfit which got the boot. Mondo’s mom told Tim she wanted Mondo to be normal, but knew he was a unique person.

His visit to Portland, Oregon, showed a frustrated and exhausted Gretchen. Will she be able to pull off an amazing collection with her spirits down?

Project Runway loves to add hurdles — and, once they are back in New York, Tim reveals the designers must create another new look with a budget of $300.

There were no guest judges this week, leaving the original three (Heidi Klum, Nina Garcia and Michael Kors) to critique the contestants’ growth throughout the season.

The judges loved Mondo’s long, patterned dress, however, they didn’t love the turquoise top. Was it chic or just 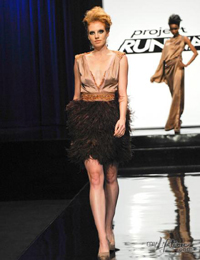 plain over the top? In the end, they decided they liked it.

They liked Gretchen’s looks, although Nina thought they were a bit “crunchy granola.” The judges criticized Andy’s headpieces and the odd fitting of his bikini, while Michael’s feathers were not arranged properly.

The judges decide that Mondo and Gretchen were definitely safe — and then Andy was deemed safe, leaving Michael as out. He was devastated!

Tell us: Did the judges make the right decision?