Lindsay Lohan can stay in rehab instead of going to jail, ruled a judge in her probation violation hearing. 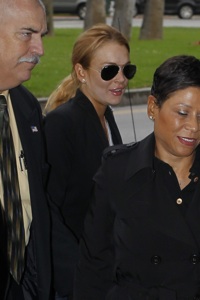 Lindsay Lohan has spent the last month in the Betty Ford Center after her lawyer got her sprung from jail on a probation violation — Lilo failed two drug tests, one for cocaine and the other for Adderall.

The district attorney wanted Lindsay to serve 180 days in jail, saying that the actress has already been to rehab five times to no avail.

This morning she faced the same judge who tried to send her directly to jail last month without hearing arguments from lawyers, and somehow got very, very lucky. Despite the probation department recommending a 30-day jail stint — and the DA pushing for even more — for her dirty tests, Judge Elden Fox had a change of heart, saying he doesn’t “want another train wreck” and is allowing her to stay in rehab.

“You are an addict. I hope you understand that.”

Another win for Lohan: She gets her scram bracelet taken off immediately.

TMZ reporters in the courtroom say Lindsay looked like she had been up all night crying, sporting red, puffy eyes and a great deal of sadness.

Lindsay Lohan will spend the rest of the year at the Betty Ford Center, remaining until at least the court-ordered date of January 3, and will remain on probation throughout the rest of 2011. While she can legally leave after that date, she can of course opt to stay longer on her own accord if she feels she needs more treatment.

But can Lindsay afford it? Ninety days at The Betty costs anywhere from $50,000 to $75,000, depending on the program, and by all accounts Linds is almost broke. Maybe her father can kick in some cash from all the interviews he’s sold about her in the past.

Speaking of Michael Lohan, Lindsay’s d-bag dad was in the courtroom today. Despite a restraining order against him by Lindsay’s mother, Dina Lohan, Michael sat on the opposite side of the room making occasional eye contact with his daughter, who looked at him with nothing but resentment.

But for the judge, Lindsay had nothing but gratitude. “Thank you,” she said, crying.

Lindsay left the courthouse flanked by two Betty Ford officials and got into a car to head straight back to rehab.