Lindsay Lohan is out of Betty Ford rehab and is due back to court today. Will Judge Fox send Lohan back to jail or back to rehab? Stay tuned! 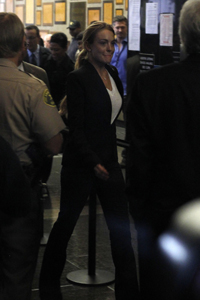 Lindsay Lohan has left the Betty Ford clinic this morning and is due back to court today for sentencing after drug tests showed cocaine in her system.

Judge Elden Fox reportedly refused to meet with Lohan’s attorney, Shawn Chapman Holley, this morning. This leads many to speculate that Judge Fox may in fact send the troubled starlet back to jail.
According to TMZ, Lohan arrived at the courthouse at 8:03 am. She wore a black blazer and jeans with her hair pulled back into a ponytail (see picture).

Also present — her crazy father, Michael Lohan. We can’t wait to hear his thoughts (again!) on all of this. Lindsay walked past him while entering the courthouse, but didn’t stop or acknowledge him, said TMZ.

Jail or Rehab for Lindsay?

Lohan has been at the Betty Ford Center to deal with her drug addiction since September 27. She is hoping, of course, that Judge Fox will let her continue her treatment at Betty Ford instead of sending her back to Lynwood Correctional Facility where she could be sentenced for a minimum of 30 days.
The L.A. County Sheriff’s Department will be standing by, with both undercover and uniform police officers, with a car ready to take her back to jail.

Stay tuned for the verdict!

read on for More Lindsay Lohan