Mel Gibson has been fired from The Hangover 2. 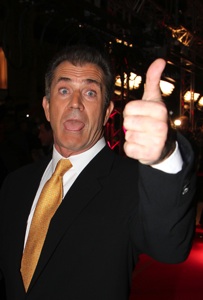 Mel Gibson was to appear in a cameo role in the sure to be hilarious The Hangover 2, but objections from the rest of the cast caused director Todd Phillips to give him his pink slip.

A couple of days ago, Zach Galifianakis hinted that there was trouble in Hangover paradise when during a Comedy Death-Ray podcast he said, “But a movie you’re acting in, you don’t have a lot of control — you just show up and vomit your lines out. I’m not the boss. I’m in a deep protest right now with a movie I’m working on, up in arms about something. But I can’t get the guys to [listen], I’m not making any leeway.”

Later the same day, it was revealed that Gibson was on tap for a small role as a crazy tattoo artist. It would be his first movie appearance since tapes of him screaming obscenities at his baby mama were leaked — including one choice part when he said, “You look like a [expletive] pig in heat, and if you get raped by a pack of [expletive], it will be your fault.”

Gibson has never denied it is his voice on the tapes. It was probably the last straw in a series of serious missteps by Gibson, succeeding in completely destroying his professional reputation, public image and personal relationships. The actors in The Hangover 2 seem to agree and reportedly complained en masse.

“I thought Mel would have been great in the movie and I had the full backing of Jeff Robinov and his team,” said Phillips in a statement. “But I realize filmmaking is a collaborative effort, and this decision ultimately did not have the full support of my entire cast and crew.”

Interestingly, the cast and crew had no problem with convicted rapist Mike Tyson participating in the first film.