Lady Gaga is forced to cancel her concerts in France. Oh no! The little Monsters are going to riot! 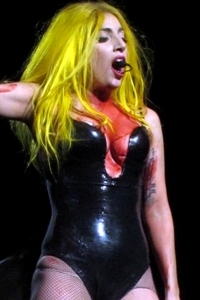 Amid strikes and protests over the French government’s move to raise the nation’s retirement age from 60 to 62, Lady Gaga’s promoter, Live Nation, has decided it will be too difficult to stage her Monsters Ball concerts in Paris on Friday and Saturday, so they’re being moved to December.

“As a result of the logistical difficulties due to the strikes in France, Live Nation today announced that the Lady Gaga performances in Paris at Bercy previously scheduled for this Friday and Saturday 22 & 23 October are postponed until 19 and 20 December, 2010,” Gaga’s website reads.

Fans can either exchange their tickets for the new dates or get a refund.

Over a million French citizens recently showed up to protest the proposal which would add two years to a work life that is notoriously lax. In France, you are required by law to take five weeks of vacation a year, but most people take eight, their work week is 35 hours long and their three-hour lunch breaks are world renowned. Yes, their productivity is higher than ours and they’re the fifth largest economy in the world, but explain this to us — what are they bitching about?

We say you pack up those million people protesting an extra two years of work and slam them down in an American job where you’re working at least 50 hours a week, fielding emails and phone calls on your days off, fighting for ten days off and a few sick days every year, just so you can retire at 70 with a pittance from Social Security.

Quit your whining and get back to work!

read on for More Lady Gaga