Despite reports claiming that Beyonce is definitely pregnant, her mom went on The Ellen DeGeneres Show to clear up the baby rumors. 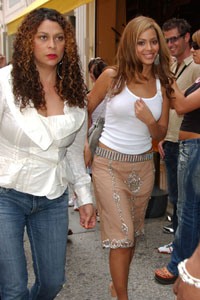 The Beyonce and Jay-Z baby rumors are only rumors, says her mom Tina Knowles.

Knowles, who went on Ellen to promote her new clothing line, Ms. Tina, spilled the beans on Beyonce baby watch 2010.

“Let’s clear it up,” said Ellen. “The rumors are that Beyonce is pregnant. Are you going to be a grandmother again?”

“I heard that, but I’m here to clear the rumors up,” said Knowles. “The truth is that it’s not Beyonce that’s pregnant. It’s me.”

“I’m kidding, y’all. I’m 56. No, no it’s not true. Not right now…With all the rumors by now I should have five or six grandchildren,” she said.

Is she covering for Beyonce?

The baby rumors started when Us Weekly reported that a source (reportedly Beyonce’s sister, Solange Knowles!) confirmed the news that the 29-year-old singer and her hubby of two years Jay-Z were expecting. She reportedly saw it as “a gift from God.”

“B was shocked. She loves kids, but she wasn’t ready to be a mother just yet,” the source revealed. “She really wanted to get her album done and tour the world again.”

What do you think? Is B’s mom playing it cool or is she really not pregnant?

read on for More Beyonce