Oscar-winning actress Gwyneth Paltrow is slated to perform her title track from her new movie, Country Strong, at the 44th Annual CMA Awards. 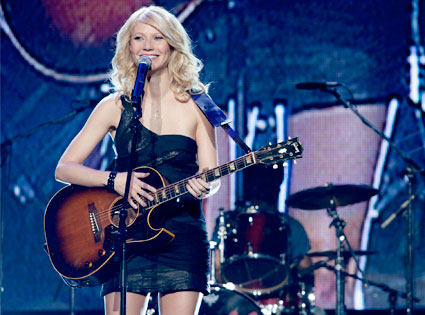 Paltrow, who plays an alcoholic country music singer, will be performing her song with Vince Gill. I have to admit, I initially didn’t think Gwyneth could pull off country music, but her title track is surprisingly good!

She recently told People that she spent months preparing for her role — and even learned to play the guitar, with the help of her husband, Coldplay frontman Chris Martin.

“He was so helpful, so sweet and encouraging,” she says. “I mean, it’s embarrassing to be playing in front of your husband…especially when he’s in one of the world’s most successful bands.”

Country Strong also stars Tim McGraw, who plays Paltrow’s husband in the movie, along with Garrett Hedlund and Leighton Meester. The movie drops on January 7th, 2011.

Tell us: How do you think Gwyneth Paltrow will do?