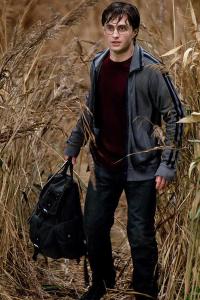 The folks promoting Harry Potter 7 aren’t having any problem keeping us talking. The final battle against Voldemort promises to be a dark one and the posters and theater previews have thus far been appropriately foreboding.

The Harry Potter and the Deathly Hallows TV promo that has everyone talking now, however, tries to shake things up with a lighter moment: We get to see Harry in a bra! “Look away, I’m hideous,” he demurs.

It is, of course, actually Fleur Delacour who’s wearing the bra. Or is it Hermione? The girls and Ron have just taken the magic Polyjuice potion that turns them all into Harry look-a-likes and Harry in a bra is one of the ladies.

The cute moment has folks talking, and also serves to remind us that Daniel Radcliffe once made headlines by getting naked for a Broadway production of Equus. Nothing gets people talking like nudity!

There are actually a multitude of Harry Potter 7 TV promos and the requisite tension, ominous lines and magical action comes with a few other lighter moments, including a larger shot of Harry’s friends as Harry, some silly Dobby lines and Ron admitting he and Harry wouldn’t last two days without Hermione.

The overall message, however, is still that Harry Potter and the Deathly Hallows: Part I takes place in “a dark time” that requires Harry, Ron and Hermione to work together. The final battle against Voldemort will get ugly, but these new previews seem to promise some laughs as well.

Read on for more Harry Potter and the Deathly Hallows