Kanye West has replaced his lower row of teeth with diamonds!

Controversial hip hop artist Kanye West has far too much money on his hands — why else would he replace his bottom row of teeth with diamonds? 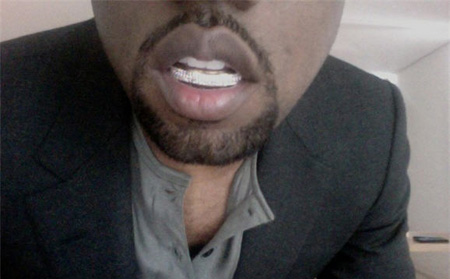 Like some sort of James Bond villain, Kanye West now has a mouthful of teeth that can cut glass and is worth more money than your house.

Kanye told his Twitter followers, “No seriously…I said my teeth are real diamonds…these are not fronts…I replaced my bottom row of teeth with diamonds.”

Why on earth would he do something like that? Beyond his regular bids for attention, Kanye told Vanity Fair it’s really quite simple. “I just like diamond teeth and I didn’t feel like having to take them out all the time,” he said.

But Kanye needed a whole new set of teeth anyway. In 2002, he was in a serious car accident that shattered his jaw in three places and left his teeth destroyed. Since he needed dental implants anyway, he decided to go for the bling!

Watch Kanye discuss his diamond teeth, his year off from music and his new short film Runaway on Ellen:

What happens if a diamond comes loose and he swallows it?