James Cameron officially announced that he is in talks, just talks, to direct Angelina Jolie in Sony’s new Cleopatra biopic, which, naturally with Cameron onboard, would be in 3D. 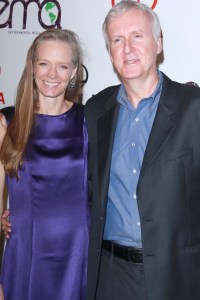 Since we all know that Cameron can make his actors look like anything he wants, even tall Smurfs, recent discussions have turned to the question: Should a more ethnic woman play the Egyptian queen?

Essence.com published an article decrying the casting of Jolie, a white actress, in the role saying, “Honestly, I don’t care how full Angelina Jolie’s lips are, how many African children she adopts, or how bronzed her skin will become for the film…I firmly believe this role should have gone to a black woman.”

Considering the majority of people think Cleopatra looked like Elizabeth Taylor with a tan, the ethnicity of the actress doesn’t much concern us. What we’d prefer is someone who looks more like Cleopatra physically, and that isn’t Angie or Liz or any other stunning black actress.

According to historians, based on what they can tell from coins, the only record of her visage, Cleopatra had a sharp, angular face, a hooked nose and a strong chin. She wasn’t considered a thing of great beauty until writers, such as Shakespeare, came along and scandalized her liaison with Mark Anthony, turning her into a femme fatale who lusted after Rome.

If Castilian Spanish is (some say falsely) rumored to be spoken with a lisp because King Ferdinand decreed it, why wouldn’t history remember Cleo as a queen who seduced her way to becoming the most powerful woman in the world because she was beautiful instead of charismatic, savvy and capable?

Why aren’t people crying out for Cleopatra to be played by a woman who’s pretty “in her own way” instead of the typical Hollywood beauty?

Read on for more James Cameron