Anna Chapman is just a girl with a gun and puts it all on display for Russia’s Maxim magazine. 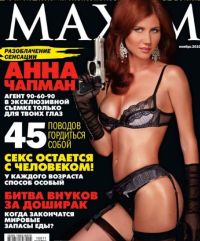 Chapman, who’s doing everything she can to cash in on her infamy since being arrested in June as part of a ten-person Russian spy ring, tells the magazine, “Most men are divided in three categories: Primitive, those that only want sex; smarter, those that want to be loved, and [the] last group — those that not only want to be loved. They also need that this love will be the biggest and most amazing feeling in your life. Those are the most difficult, but that is my favorite category.”

What about those who know how to defuse a bomb and like to sweep rooms for bugs? 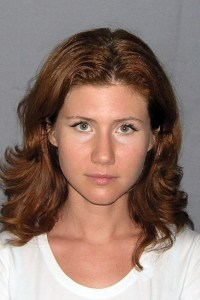 Since posting Anna’s shots and a behind-the-scenes video of the super risque photoshoot, Maximonline.ru has reportedly crashed several times thanks to high traffic. We assume it’s not about the sexiness of the content but because “Anna Chapman has done more to excite Russian patriotism than the Russian soccer team,” as the site claims.

Earlier this year, Anna was even awarded the Kremlin’s top honor for her role in the spy ring.

The photographs and interview with Chapman are part of the magazine’s run-down of Russia’s 100 sexiest women. She earned that recognition right after she was discovered as a Russian spy and deported and sexy photos from social networking sites like Facebook made their way to news outlets.

Her cover has got us thinking and now we can’t help but wonder: Can you imagine if Maxim had been around when J. Edgar Hoover was running things?