Sources say that not only is Rachel Zoe pregnant, but also she’s expecting a baby boy! 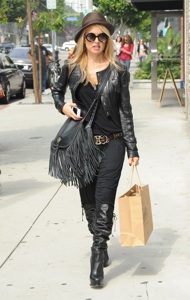 Stylist to the stars Rachel Zoe is definitely pregnant and expecting a boy, says a source close to the fashionista. “They found out they were having a boy in the past week,” said the source, adding that Zoe is approximately 18 weeks along.

However, at the Vogue Fashion Fund show in LA, when Zoe was asked if she was pregnant she said, “Not at all. I’d be home sleeping.”

And when photogs caught her on the street and asked about the baby, she responded, “There is no baby.”

Despite her denials, eyewitnesses say that Zoe was the only person at her table not imbibing in champagne, and that she spent nearly the entire event talking to former client Nicole Richie about babies.

More evidence? She has yet to re-up her contract for another season of The Rachel Zoe Project. Conversely, she sure doesn’t look pregnant, and on someone as skinny as her you can tell if she eats a cherry tomato.

Stay tuned for more news on the Rachel Zoe pregnancy as it comes to light!

53 mins ago
by Sara Kitnick