Week five of Dancing With the Stars left Rick Fox and Florence Henderson under the red elimination light. Who got the boot? 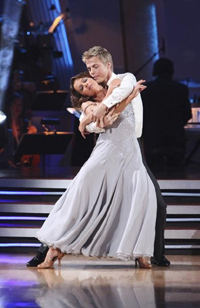 With eight couples remaining in season 11, week five of Dancing With the Stars was a fun one as the contestants danced to TV-themed songs. Kyle Massey and Lacey and Bristol Palin and Mark had the lowest judges’ scores after Monday’s performance, but would their fans’ votes save them?

After being subject to fake infomercials featuring the cast (Really? Personal dance injury lawyer David “The Sledgehammer” Hasselhoff?), we get down to business.

The first round of results has Kyle and Lacey and Bristol and Mark safe. It is Bristol’s birthday, so she may have caught a lucky break.

The second round of results has Brandy and Maks safe, while Jennifer Grey and Derek (my personal favorites!) are still in danger.

The third round of results has Kurt Warner and Anna safe, while Rick and Cheryl are still in danger.

The next round of results found Jennifer, Derek, Audrina and Tony safe — however, we learn that Audrina did perform an illegal move in her rumba last week. Tony is not pleased.

The bottom two turned out to be Rick and Cheryl and Florence and Corky — with (drum roll, please!) Florence Henderson and Corky going home this week. 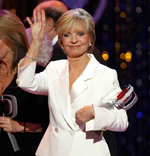 The 76-year-old TV legend gave a heartfelt speech upon learning she was being sent home. “This is one of the best-produced shows I’ve ever been on. The best crew, hair, makeup, costumes — even the judges are the best…Brooke, Tom, the music, and most of all this darling man, Corky Ballas.”

Tell us:  Do you think voters got it right? Who do you think should have gone home?

read on for more Dancing With the Stars