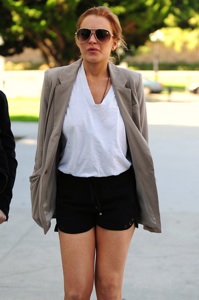 Lindsay Lohan has a date with destiny: Her probation violation hearing is on Friday.

Lohan failed two drug tests in September and was almost immediately thrown in jail by a very unsympathetic judge. Turns out, though, that the judge was wrong to deny Lindsay bail and she was sprung almost immediately — only to hop straight into the Betty Ford Center, where she currently remains.

So what’s on the agenda for Friday? TMZ says Lindsay won’t dispute her parole violation, but is hoping the judge will allow her to remain in rehab instead of sending her to jail.

In fact, Lindsay Lohan’s legal eagles say interrupting her treatment with a jail sentence would totally harsh her buzz, disrupt her treatment and give her a major case of the sads.

Just in case, the LA County Sheriff’s Department is getting their hair did in anticipation of flashbulbs if they have to haul her off to the pokey, where she very well could wind up spending 30 days. The judge in charge of sentencing her on Friday is the same one that tried to send her there a month ago — he’s got no love for Linds.

Stay tuned to SheKnows for more on the Lindsay Lohan saga as it develops!