After seven years on The Shield, star Michael Chiklis was ready to star in a show that he could watch with his children. For actress Julie Benz, after her violent demise on Dexter last season, she had promised her mother her next character would be someone who could not be killed. Both got their wish when they were cast in the ABC breakout hit, No Ordinary Family. 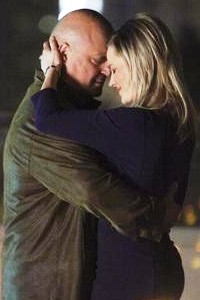 No Ordinary Family, airing Tuesdays on ABC, is the story of an average American family who emerges from a plane crash with extraordinary superpowers.

Chiklis and Benz are husband and wife, and parents to two children. Mom and dad must come to grips with their own newly acquired hero powers while managing their children, who have also earned their own superhero stripes. Think controlling the average American youngster is difficult, try raising two with superpowers!

Benz and Chiklis phoned SheKnows for an exclusive chat about No Ordinary Family and how the show is no ordinary television hit!

SheKnows: What was it that most appealed to each of you about No Ordinary Family that you had to make it the next chapter in your careers?

Julie Benz: For me, after being so violently killed off of Dexter, I made a promise to my mom that I would find a show that wouldn’t kill me [laughs]. She was very disturbed by that. I also loved the role of Stephanie, a strong female character to play that was very active. During pilot season, Stephanie was the strongest character I could find in a role that really appealed to me because she was a working mother struggling with making time. That’s something that’s so relatable to women across America, not having the time to get everything done. Plus, working with Michael Chiklis was a huge appeal for me too after working with Michael C. Hall on Dexter.

SheKnows: You found another Michael!

Julie Benz: I have good luck with Michaels.

Michael Chiklis: With me, I wasn’t looking for something specifically. I was looking for a great role and a great script in whatever form. What I noticed is the television landscape is broken into niche. Having come off such a dark, hard-hitting adult drama in The Shield for seven years, this show was fresh and really different and something I haven’t seen on the television horizon for a long time. It just appealed to me on so many different levels. It had the look of a show that would last a long time, where you could tell a lot of different, varied stories. Again, it was a family show at its core, and as a father of two, there’s literally almost nothing we can watch together as a family. That just appealed to me. I thought, “Wow. This is something entirely different.” Then, there’s Julie Benz.

No Ordinary Family strikes a chord

SheKnows: Also for both of you, you debut a new show and, of course, there are the nerves. Now, it’s out there and people have responded so favorably, what has that kind of encouragement from the fans been like on the No Ordinary Family set? 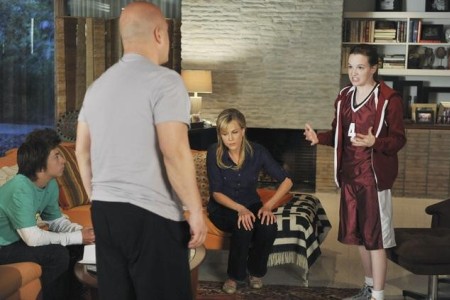 Michael Chiklis: It is very exciting. The common wisdom in television is you cannot launch an 8 o’clock show against massive, established hits. It was quite daunting, frankly for all of us. You work so hard on something, you want people to see it. For us to have done so well against such amazing and brutal competition, it’s incredibly gratifying on so many levels. Especially on a show like this that is so big, that requires so much in terms of hours — this crew works 75 hours a week — people don’t realize how much effort goes into one episode. People have said it’s a live action Incredibles and I love that comparison. I have to point out that The Incredibles is not only an animated feature, it took seven years to make. They could pour over every last detail. They have the luxury of re-drawing it. Live action has so many different challenges to it inherently. We’re doing something that’s being compared to the seven-year movie-making experience, in nine working days. 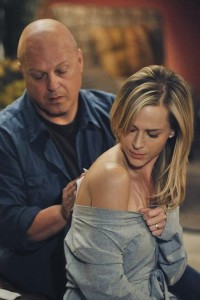 SheKnows: That is amazing. For you Julie, what do you make of your superpower? Do you think other moms out there might envy you?

Julie Benz: I think women in general and not just moms, but I wish I had super speed. There are not enough hours in the day for any of us, really. What I loved about Stephanie is she’s a modern woman, a career woman, just like in today’s world, she’s really struggling. And having super speed, it really helps her get through her day. At the same time, she questions using her abilities for her own motherly needs. It’s so relatable. You know what? We need to talk about expanding the day to 36 hours, I think most women would agree that 24 hours is not nearly enough [laughs].

Michael scores with his kids

SheKnows: You mentioned your kids Michael, are they impressed with you playing a superhero, or is it just dad’s doing his thing?
Michael Chiklis: I think it’s a little bit of both, honestly. They love it. I’m very close with my kids, so sometimes I think I really do have superpowers [laughs]. I just love that I can do something that they enjoy so much. One’s 17 and one’s 11, and we watch the show together as a family. They love the cast so much. The casting of the show is so key. I feel really blessed that I have this cast around me, these are all really extremely talented people. They’re not just talented actors, but they are really likeable, they are innately likeable people. I just smile when I watch the show, likeability goes a long way in television.