It seems every time a female celebrity puts on a little weight, the first thought is always that they’re pregnant and that has been happening repeatedly to Khloe Kardashian. 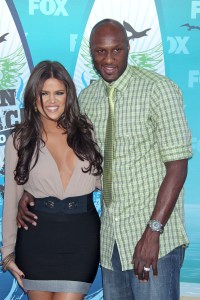 Pregnancy rumors happen constantly. An unflattering shirt in June sparked rumors that Jennifer Garner was knocked up with her third kid. Mariah Carey has been getting whipped through the rumor mill recently because of her unexplained weight gain (we think it’s a champagne baby). Eva Longoria was asked to pack on some pounds for her role on Desperate Housewives and soon tabloids were in a tizzy that the starlet was pregnant.

Also, if Jennifer Aniston has one day of bloat, she’s on the cover of five different magazines exclaiming her expecting nature.

Back in June, Khloe Kardashian boldly pronounced to Us Magazine, “I’m not pregnant. I’m just fat.”

OK Magazine has devoted an entire article in their latest issue to dissecting evidence that proves she actually is expecting a little bundle of joy. According to the magazine, Khloe Kardashian’s covering her tummy with “large satchel bags,” she has a “newfound love of loose fitting garments” and she “[screams] for ice cream.”

Can you say: circumstantial?

Ever since the Olsen twins, everyone sports oversized boho bags, loose fitting clothes are comfortable and stylish and, seriously, who doesn’t scream for ice cream?

Khloe Kardashian, the 25-year-old Keeping Up with the Kardashians star, has been married to Los Angeles Laker Lamar Odom for just over a year and they’ve been on baby watch since the jump leading us to wonder, what’s the big rush?